The operational study on the prevalence and profile of comorbidities in the homeless people with active TB and without TB in Chisinau and assessment of treatment drop-out or treatment failure risks is part of the “Enhancing TB diagnosis and MDR detection by rolling out Xpert MTB/ RIF technology at district level, with special emphasis on high risk groups” project implemented by the Center for Health Policies and Studies and the Public Association ”AFI” as a sub-recipient, with the support of the TB REACH StopTB Partnership

This research is designed to provide factual material about the problems faced by the homeless people, focusing on issues relating to health and the access to health care services. The study is based on a survey among 153 people in the target group of the project, including a group of 76 people with TB (TB +), and a control group consisting of 77 persons without TB (non-TB) from among the homeless in Chisinau. The respondents were selected by the mobile team of the A.O. “AFI” based on distinct signs for the homeless and the eligibility criteria.

The Study was commissioned by the National Tuberculosis Control Program and the TB control program in Chisinau. The study was approved by decision of the Ethics Committee of the Public Medical Institution of the Institute of Public Phthisiopneumology “Chiril Draganiuc”. Preliminary results of the operational study were discussed at a roundtable with the participation of social and health care professionals in Chisinau, the National TB Control Program and non-governmental organizations. The results of group discussions were used as the basis for formulating a number of recomandations. The results of the study will be used to guide the decision making to improve the quality of clinical management of TB cases among the homeless people.

The study can be accessed below. 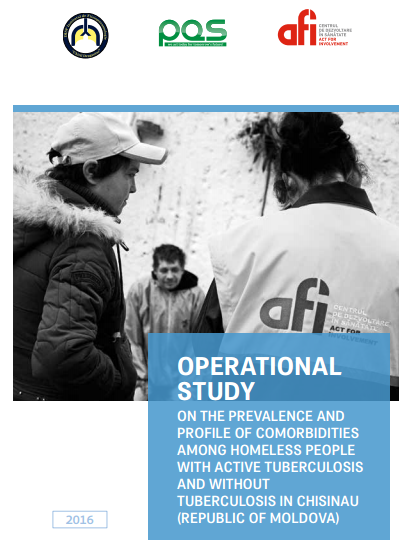