The TB Reach poject is implemented at a large scale on the national level by different organizations including AFI. However, our center is responsible for implement a certain component - incrasing the access to medical services for vulnerable groups. Project activities are aimed at two specific target groups of disadvantaged people namely, homeless people and injecting drug users.

The project goal is to increase the detection rate of TB cases, but also to do it as fast as possible in order to ensure a timely and complete treatment. This way increasing the cure rate of TB patients that participate in the TB Reach programme. Therefore, AFI refers and accompanies individuals from vulnerable groups to be tested using the GeneXpert method. GeneXpert technology is a rapid test capable of detecting TB cases easily and safely, with results available in just 2 hours. The use of Xpert method is supported by the World Health Organisation.

AFI helps to identify probable cases of tuberculosis intensified and Xpert testing in high risk groups (homeless people and drug users). To provide help drug users collaborate with network Harm Reduction Programmes, in particular with the organization Youth for Right to Life in Balti and Chisinau Organisation for Present and Future. And the homeless are helped through mobile team display in Chisinau and Balti through public association Hope Earth.

In addition, an equally important part of TB Reach project is the study of health and behavioral problems among homeless people. The study aims to investigate the causes of postponements and supervision loss from anti-tuberculosis treatment among this group.

During implementation, 1 October 2014 - 30 September 2015, the AFI center has the responsibility screen (to question on the signs of tuberculosis) 6,200 people from vulnerable groups. Also, AFI's mobile team must ensure that 700 homeless people and drug users 740 that are TB suspect are tested via GeneXpert.

The project is financed by STOP TB Partnership Secretariat of the World Health Organization through the PAS Center. 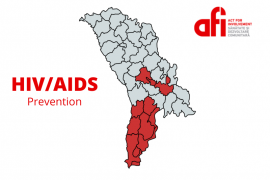